In the middle of difficulty lies opportunity.
– Albert Einstein

Everyone faces difficulties in their day-to-day lives, but the only difference is, they are totally subjective. For example, what’s difficult for someone else might not be the same for you and vice versa.

The difficulties are not the same for everyone, everyone sees them differently. For some, difficulties can be nothing short of a horror story, while for others it can be an opportunity to solve other people’s problems.

Any difficulty can turn into an opportunity by developing the solution which can enable several others to ease out the challenges which they face in their day-to-day life.

Running away from a problem or a challenge is not the optimal solution, it doesn’t work from any perspective. To face them by self-reflecting is what could be the best approach. Running away only makes it worse.

Turn the problems into an opportunity

Nothing teaches us better than adversity, behind every great story there was almost one common thing and that was the adversity. To fight and overcome challenges is what makes us stronger than ever before. This is what gives a boost in confidence and makes life more interesting.

The best way to turn problems into opportunities is to create a solution that can solve problems for thousands or even millions of people. There are many others who share your difficulties, so why not do something which will not just solve your problems but also solve those of others?

Challenges are what make life interesting and overcoming them is what makes life meaningful.
– Joshua J. Marine

It is important to remember that behind every great innovation there is a problem or difficulty. Things get innovated to solve the problems at scale.

We all face problems or difficulties throughout our lives, but instead of viewing them through a negative lens, change your approach, don’t give up or try to run away from them, instead, strive to do it in a way that will create an impact on others by improving their lives.

As an example, you can offer a solution to others so they won’t have to face the same problems as you. That’s how real business works.

Obstacles can serve as stepping stones

There is one great quote by Victor Kiam, “Entrepreneurs are simply those who understand that there is little difference between obstacle and opportunity and are able to turn both to their advantage.”

Do not let obstacles hold you back, use them to your advantage, treat them appropriately, and let them be a stepping stone in your journey to success. Let the adversity strengthen and create confidence in you.

Opportunity is missed by most people because it is dressed in overalls and looks like work.
– Thomas Edison

Isn’t it true that it is the struggle that makes us realize the true value of success?

Dr. A.P.J. Abdul Kalam, once said: “Man needs his difficulties because they are necessary to enjoy success.”

Not being willing to discover the errors or mistakes simply means inviting them unexpectedly in the near future.

Failures or mistakes are not end-points, learn from them, let them make you better than what you were yesterday because ultimately they are the sign that someone had done enough experiments and that’s what leads towards the robust strategy.

Never let difficulties hold you back, rather, use difficulties as a source of motivation, and create an opportunity that not only solves your problems but also thousands of others.

Difficulties are things that show a person what they are.
– Epictetus 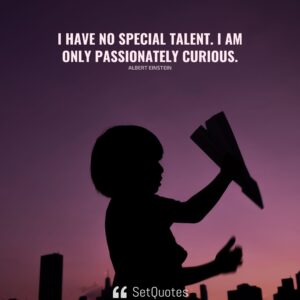 I have no special talent. I am only passionately curious.

If you want to live a happy life, tie it to a goal, not to people or things.

Learn from yesterday, live for today, hope for tomorrow. The important thing is not to stop questioning.