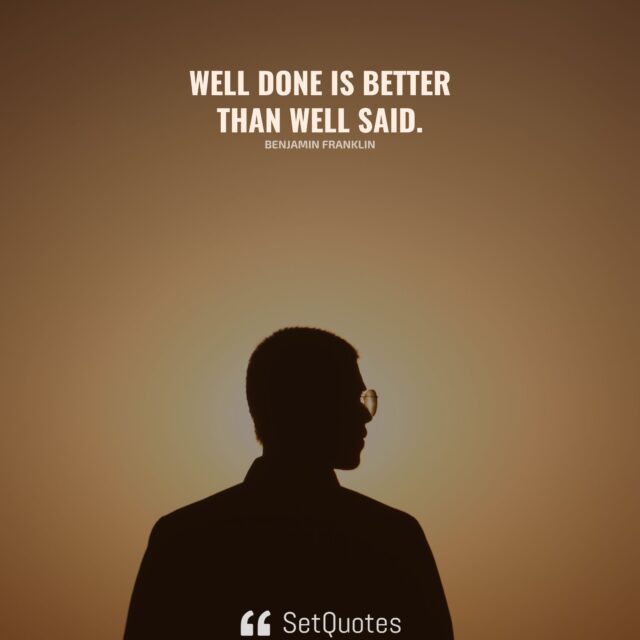 The quality of your ideas doesn’t matter unless you execute them. Thoughts and words are as valuable as actions that match them.

A lack of consistency between your words and your actions is the fastest way to lose credibility. Remember there’s a big difference between being done and having plans to be done.

Put your actions before your words; let your actions speak louder than your words. Offering more than what is promised is one of the most effective ways to win trust and credibility.

Behind every stellar execution is robust planning, but planning is worthless if there is no execution. If you don’t take action, your ambitions are just wishes.

In order to demonstrate something effectively, it is more effective to do it rather than to say it. When it comes to action, fewer words are needed. The action speaks for itself.

It is always easier to say it than to do it, but convenience has a price. Without action, words don’t mean anything.

You can’t build a reputation on what you are going to do.
– Henry Ford

You should express your opinion through your actions instead of your words. There’s no point in having an opinion unless you can demonstrate how it can be accomplished.

It is not difficult to dream about it, nor is it difficult to speak about it. Nonetheless, it is difficult to turn it into reality without careful planning and preparation. Words alone are insufficient. Dreams always come true through action.

We can either be action-orientated or talk-orientated, but the best balance between the two is probably what we should aim for. It is imperative to use words and actions where they are necessary.

Make your point with actions and words instead of just words. At the end of the day, what matters most is our willingness to act. When we are motivated enough to get started, it is easy to be action-oriented.

The way to get started is to quit talking and begin doing.
– Walt Disney

Those who have achieved great things are more than just dreamers. In order to succeed, you must be both a dreamer and a doer.

Motivation alone is insufficient. Motivation is really easy to lose throughout the long run. That’s when momentum comes into play. Ultimately, our habits are what make us who we are.

There is no value in words or knowledge unless they solve a real problem. Our words are only as effective as the way we execute them. However, without such execution, every word we utter is almost meaningless.

A first step never comes at a better time than now. The most effective way to begin is to begin.

The superior man acts before he speaks, and afterward speaks according to his actions.
– Confucius

By failing to prepare, you are preparing to fail.