Success is walking from failure to failure with no loss of enthusiasm.
– Winston Churchill

Wisdom is to understand that success and failure are simply outcomes. And outcomes always happen regardless of whether we take action or not. However, expected outcomes happen when we plan and work for them.

Remarkable things don’t always happen on the first try. It often takes more than hard work to achieve them. If things don’t work out as planned, it’s best to examine the situation and try again with a better approach rather than giving up.

The path to success is not always a matter of walking from failure to failure. It’s more about knowing when to keep trying and when to move on to the next. Even when you give your all, things don’t always turn out the way you expect. Sometimes it’s better to shift your focus to the next thing rather than hold onto one thing rigidly.

Agility and adaptability are what matter the most. Success is largely determined by our reaction to failure and our ability to adapt when we encounter challenges. When something doesn’t work, aren’t there many other things to try?

The key to success is to keep trying without giving up

It isn’t about holding onto ideas rigidly, but rather about exploring and experimenting when the first idea fails. When one idea won’t work, aren’t there endless numbers of ideas to experiment with?

Failure is much more expected when we try something completely different. The most significant things rarely happen in one go. They often emerge after repeated attempts. Do we ever reach our goal if we give up after facing an initial setback?

Success and failure are nothing more than phases, they aren’t permanent either. Each of them is a side of the same coin; one cannot exist without the other, they can only coexist.

Both success and failure serve as indicators. A success indicates that one is ready to move forward with the next challenge. On the other hand, failure encourages one to self-reflect upon their actions to come up with a more effective approach for the next try.

The story of remarkable success is often accompanied by the story of a failure as well. Nothing teaches us better than our own mistakes and failures. Great things happen when one acknowledges their failure and keeps trying with the most realistic approach possible.

When we attempt to avoid failure, aren’t we avoiding new experiences? Is it possible to learn how to ride a bicycle if one puts a condition on themselves not to fall off?

I attribute my success to this – I never gave or took any excuse.
– Florence Nightingale 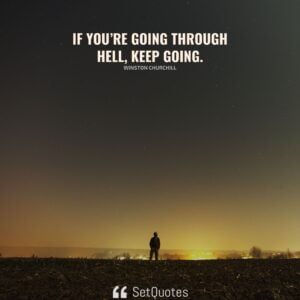