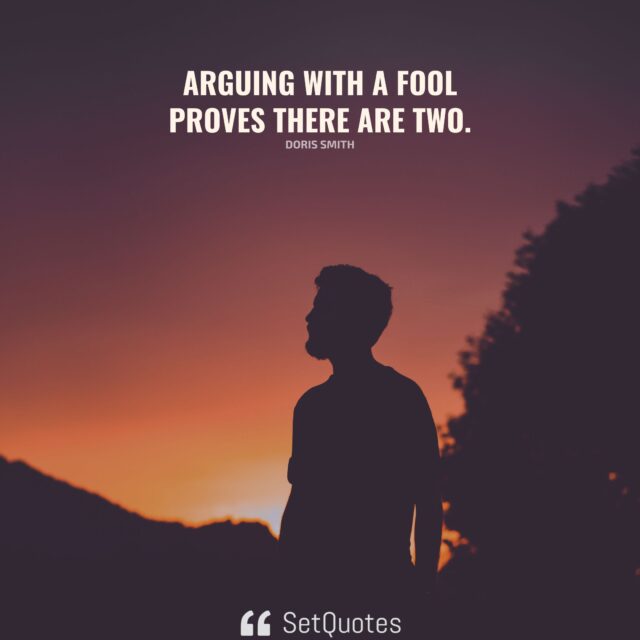 Arguing with a fool proves there are two.
– Doris Smith

There’s a fine line between arguing and reasoning. Arguing with someone with the aim of winning that argument at any cost is a losing proposition. One-way communication for the sole purpose of proving your point is the most destructive thing you can do to a close relationship.

When two individuals communicate with the only aim of winning an argument, either of them might win the argument. The two of them, however, lose the situation in the end. The moment we participate in the argument is the same moment we lose.

Arguments are better avoided by choosing silence. Silence may not help you to win an argument, but, the only way to win is to not win it. Why choose chaos when you can win the situation with peace?

Every individual is unique in their own way, no two are alike. You should respect someone’s opinion when they differ from yours. The key is to only speak when someone is truly interested in listing and wants to engage in two-way communication.

Embrace the reality that not everyone deserves your words. When your silence can be more powerful than your words, why say anything at all? Isn’t it true that we say a lot more and a lot better by not expressing anything?

When we argue with a fool, it will always show that there are two. Because a wise individual would never compromise their moral values in favor of another’s. Such individuals would not lower themselves to accommodate the disrespect of another.

It is better to keep your mouth closed and let people think you are a fool than to open it and remove all doubt.
– Mark Twain

You do not have to change your behavior or compromise your moral values just because someone does not hold those values? This is because when you do so, there is no difference between you and them.

Reasoning with a fool can be challenging because they might not distinguish between a dialog and an argument.

Some people are more interested in answering you without actually listing to you. That’s a silly thing that we’ve all done at one time or another. Each of us has egos to satisfy, and that’s the reason we sometimes end up doing such silly things. Everyone makes mistakes. What matters is that we reflect on them to avoid repeating them.

The best way to win an argument is to avoid it

Keep your boundaries in mind. If you don’t have one, set one. Respect your values and live by them. Don’t lower your values or downgrade them just because someone else is doing so.

Anyone who downgrades themselves is bound to realize their mistake sooner or later. Therefore, it is a wise idea not to make mistakes simply because the others are making them. Your ego or anger should never overpower your wisdom.

Whatever you decide to do, do it consciously. Be fully present when you make a decision, whether it is to speak or to remain silent. Someone else’s unwise attitude does not have to force you into making bad decisions.

For the sake of being right in an argument, you do not need to compromise your core values. You don’t have to win an argument in the first place. Do not let your ego get in the way of your wisdom.

You cannot win over someone with the same rigid behavior that they have. Even if they reject your view, still welcome and embrace their rigid opinion. Don’t lose your softness; they will sooner or later realize their mistakes.

Understand that you are not here to teach everyone the facts. You do not have to correct anyone, especially if they are not close to you and your opinions are not appreciated. The art of knowing when to speak and when not to speak is the essence of wisdom.

It is not always the case that every argument will lead to a solution, nor are they all supposed to solve a particular problem. Therefore, doing anything that neither fulfills any goal nor solves any problem is nothing less than foolish. Quite often, we all engage in such activities, but the key is to reflect on them and realize their consequences so that we don’t repeat them.

Never argue with stupid people, they will drag you down to their level and then beat you with experience.
– Mark Twain