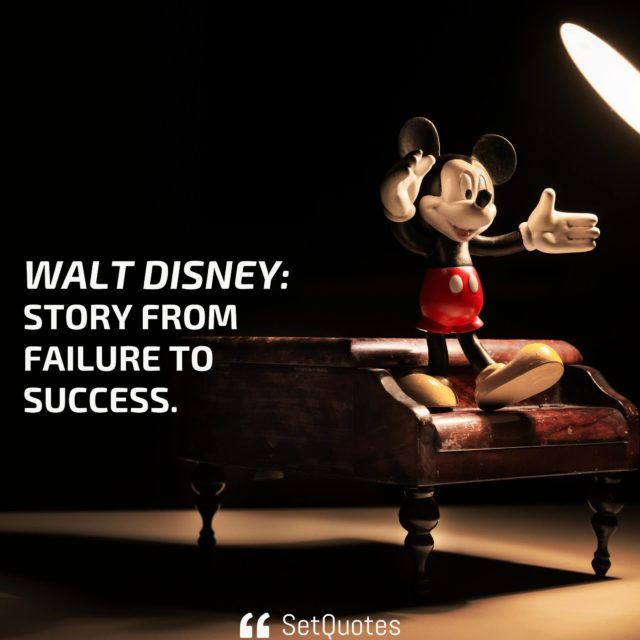 Walt Disney: Story from failure to success: A. P. J. Abdul Kalam, Once Said: “Don’t read success stories, you will only get a message. Read failure stories, you will get some ideas to get success”. We can learn many things from the Walt Disney’s career, he started From selling newspapers and snacks to passengers on the railroad, in September 1918 he joined the Red Cross as an ambulance driver.

Walt Disney, Once Said: “All our dreams can come true, if we have the courage to pursue them“. Big things have small beginnings. Anyone can make a dream into a reality, but it takes a courage. The future belongs to those who never give up. Presenting Walt Disney’s story from failure to success. 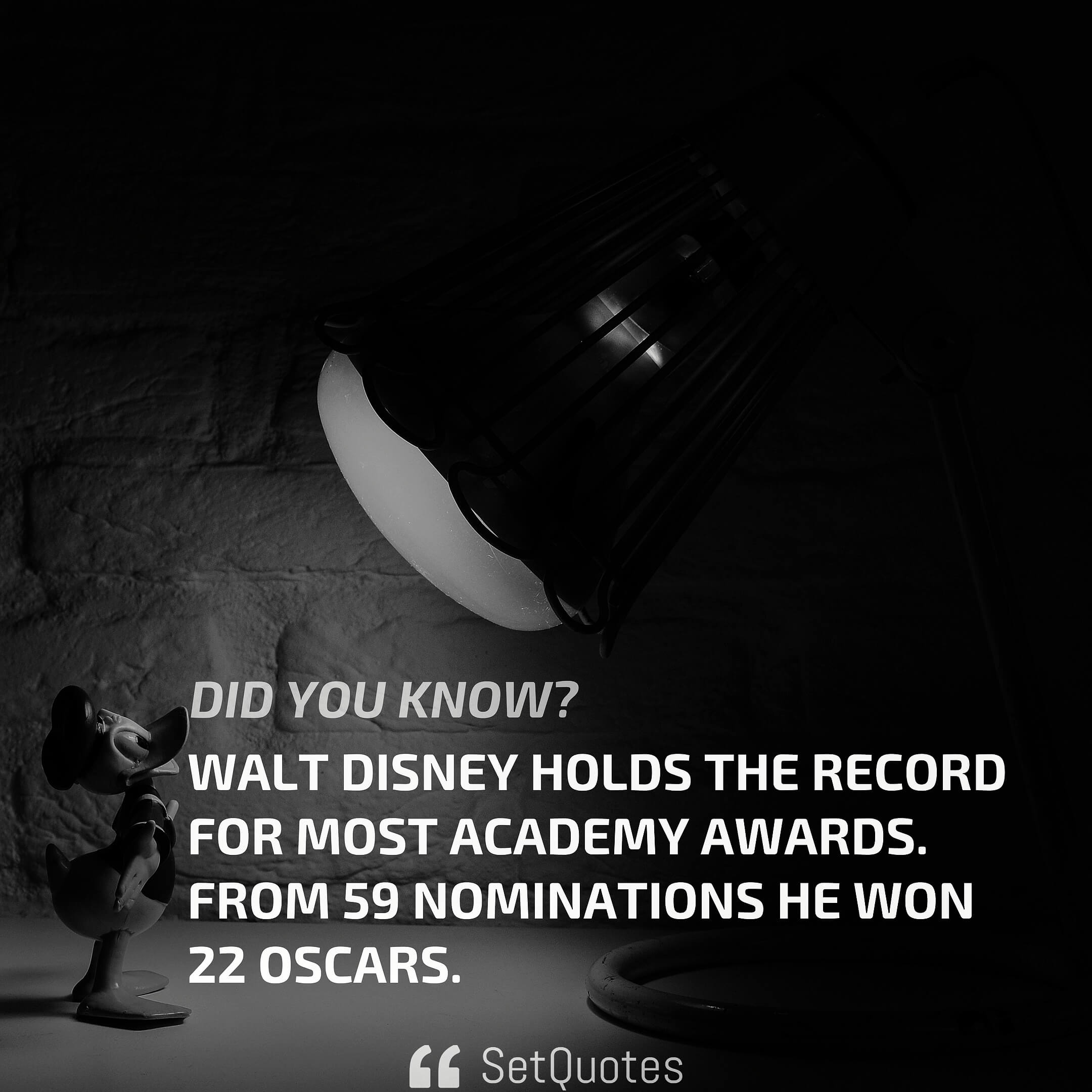 As a film producer, Walt Disney holds the record for most academy awards. From 59 nominations he won 22 Oscars. In 1928 Walt developed the character “Mickey Mouse”, which was his first most popular success. In 1955 he opened Disneyland.

Walt Disney was the fourth son of Elias Disney and Flora Call Disney. Disney lived most of his childhood in Marceline, Missouri, where he developed his interest in drawing when the retired neighborhood doctor paid him to draw a horse. Walt Disney practiced drawing by copying the front page cartoons from the Appeal to Reason newspaper. 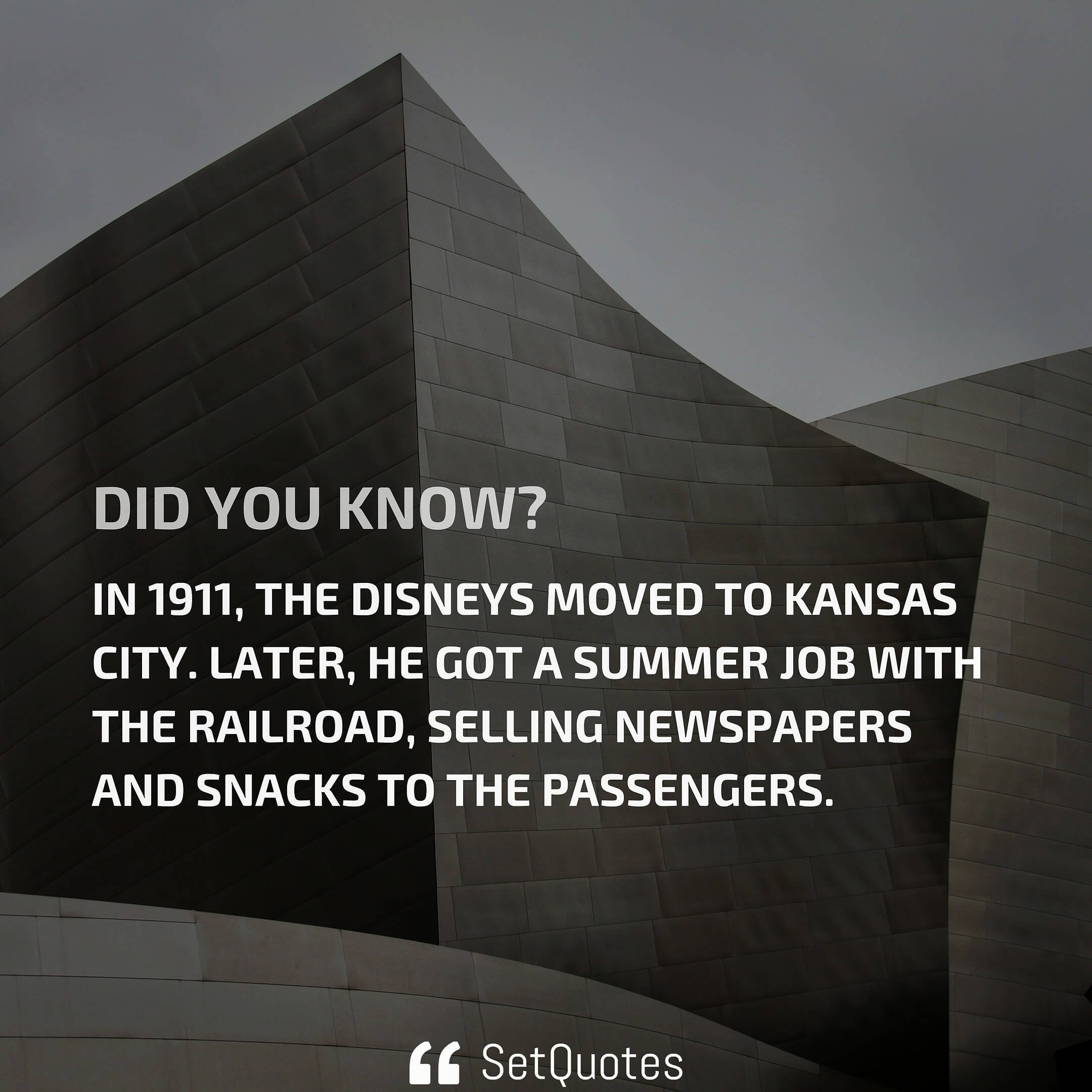 In 1911, the Disneys moved to Kansas City, Missouri, where he got introduced to the world of vaudeville and motion pictures. In Kansas City, Walt Disney developed a love for the trains. His uncle, Mike Martin, was a train engineer. Later, Disney got a summer job with the railroad, selling newspapers and snacks to the passengers. 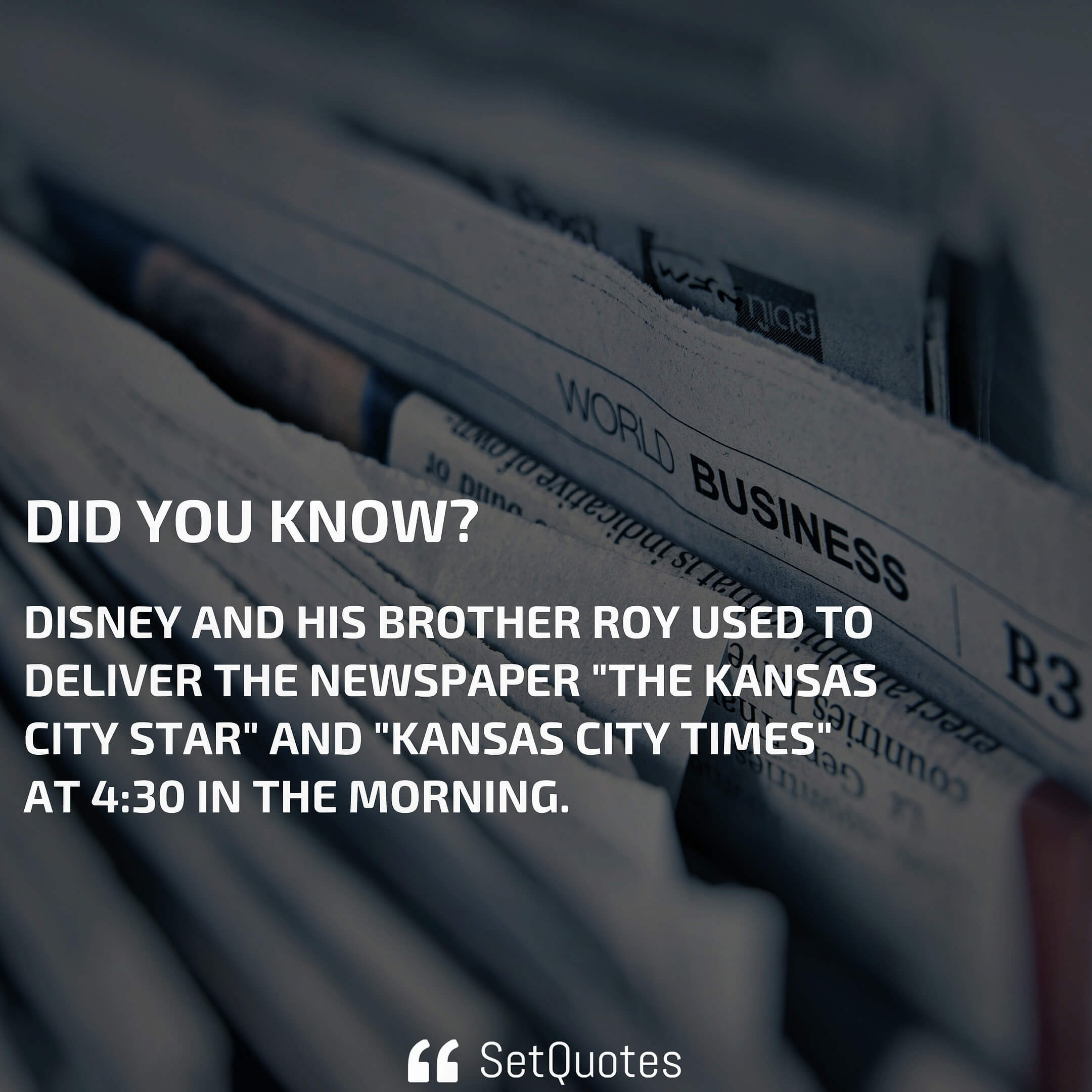 When Elias had purchased a newspaper delivery route, Disney and his brother Roy started delivering the newspaper The Kansas City Star and Kansas City Times at 4:30 in the morning. Due to exhausting morning schedule Walt often received poor grades, however, he continued his paper route for more than six years. Disney attended Saturday courses at the Kansas City Art Institute and also took a correspondence course in cartooning. 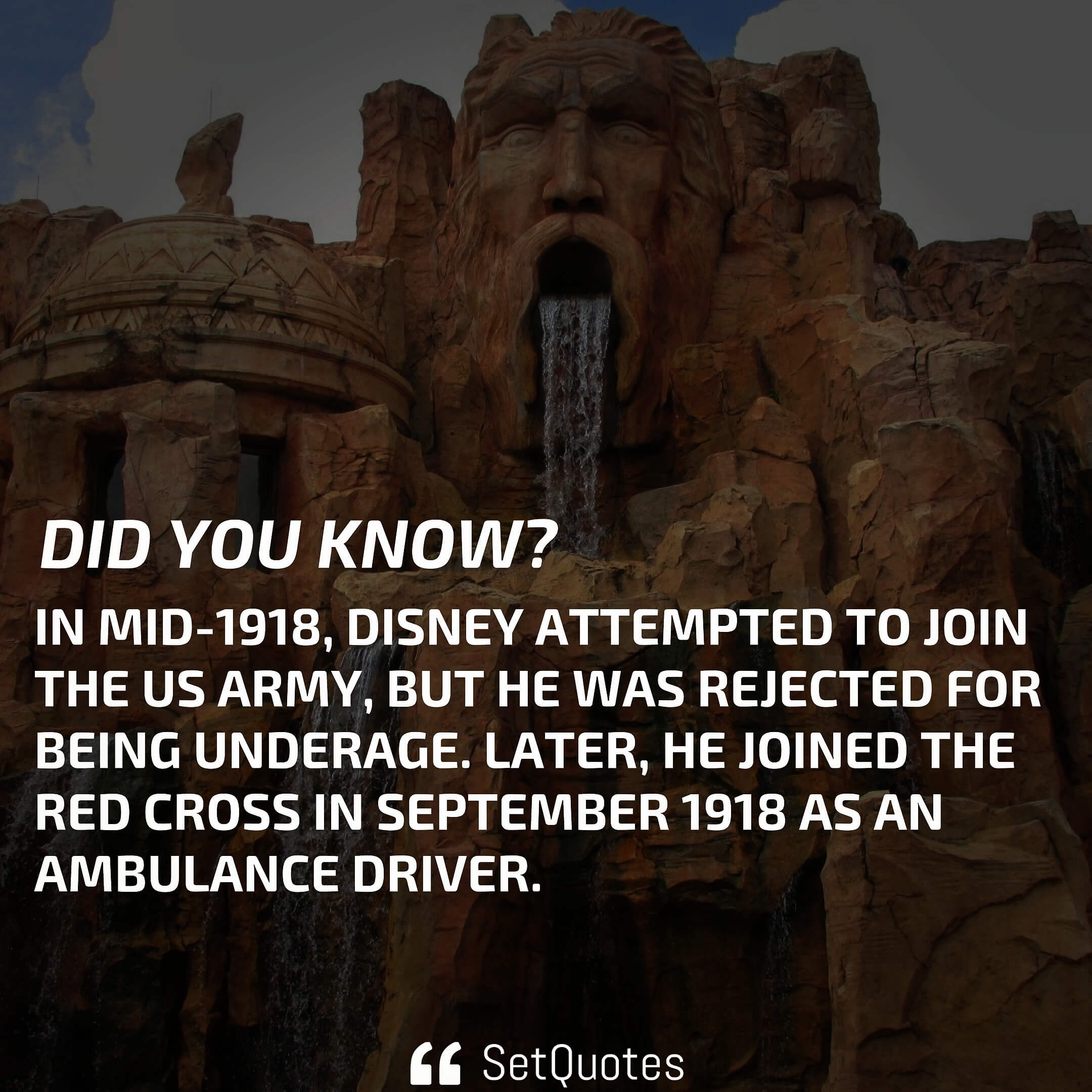 Disney attended McKinley High School in Chicago, where he was a contributing cartoonist for the school paper. In mid-1918, Disney attempted to join the US Army, but he was rejected for being underage. Later, he joined the Red Cross in September 1918 as an ambulance driver and was sent to France for a year. Walt Disney’s work got published in the army newspaper Stars and Stripes as he used to draw on his ambulance for decoration. He moved back to the U.S. in 1919. 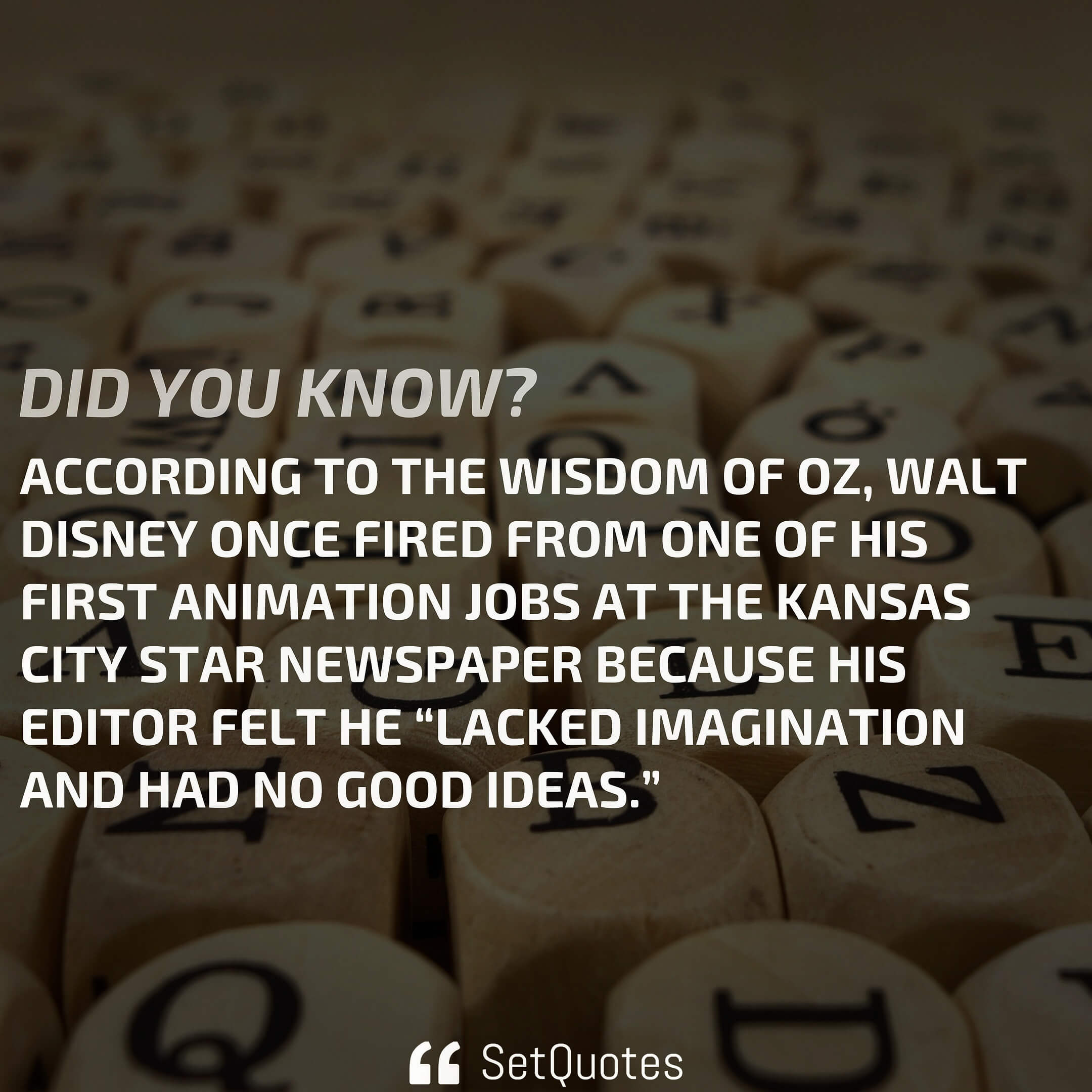 In 1919 Walt started his career as a newspaper artist. According to The Wisdom of Oz, Walt Disney once fired from one of his first animation jobs at the Kansas City Star newspaper because his editor felt he “lacked imagination and had no good ideas.”

Disney drew commercial illustrations for advertising, theater programs and catalogs when he joined the Pesmen-Rubin Commercial Art Studio as an apprentice artist.

In January 1920 Disney and Iwerks were laid off from the Pesmen-Rubin. Iwerks and Disney formed a company, in 1920, called Iwerks-Disney Commercial Artists. The venture was short-lived. After failing to attract many customers Walt started work for the Kansas City Film Ad Company. The company produced commercials using the cutout animation technique. Disney developed his interest in animation, although he preferred drawn cartoons such as Mutt and Jeff and Koko the Clown.

Disney began experimenting with a camera at a home, doing hand-drawn cel animation. He opened a new business with a co-worker from the Film Ad Company, Fred Harman.

Disney moved to Hollywood in July 1923. In October Disney makes a deal with New York distributor Margaret Winkler. They signed a contract for six Alice comedies, with an option for two further series of six episodes each. Walt and his brother Roy formed The Disney Brothers Studio‍, which later became The Walt Disney Company‍. In July 1924 Walt Disney hired Iwerks.

Early in 1925, Walt Disney hired an ink artist, Lillian Bounds. They married in July of that year. Universal Pictures, Disney, and Iwerks created a character called Oswald the Lucky Rabbit.

Disney and Iwerks developed Mickey Mouse to replace Oswald as Disney found that Winkler and her husband, Charles Mintz, had stolen the rights to Oswald, along with all of Disney’s animators, except for Iwerks. 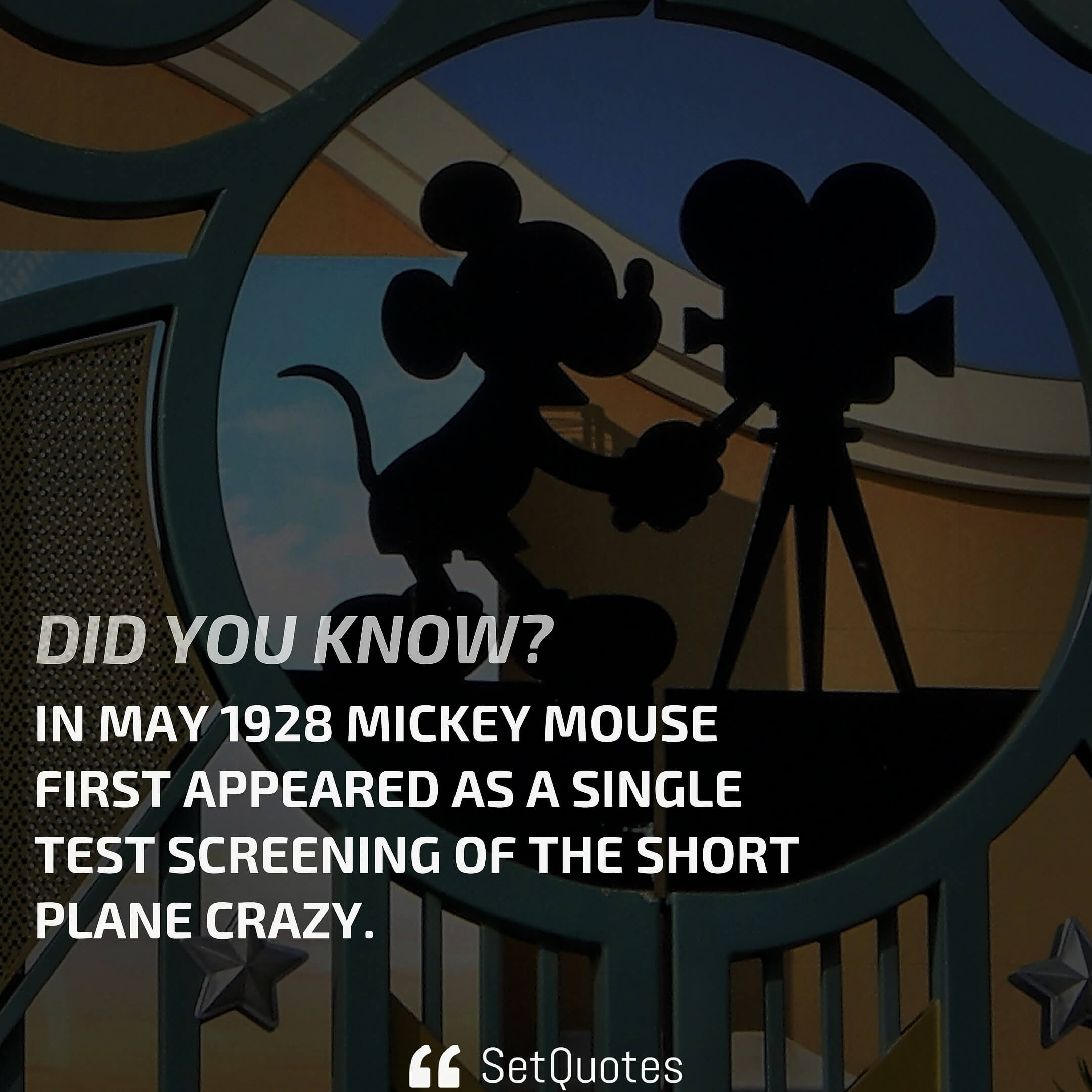 In May 1928 Mickey Mouse first appeared as a single test screening of the short Plane Crazy. However, the second feature, The Gallopin’ Gaucho, failed to find a distributor. The cartoon becomes popular with the Walt as the voice of Mickey.

Disney created Silly Symphonies in 1929 which featured Mickey Mouse’s friends, Minnie Mouse, Donald Duck, Goofy, and Pluto. In 1933 he won Oscar for the cartoon Flowers and Trees, this most popular cartoon was the first to be produced in color.

By 1934, Disney started production for the full length animated cartoon movie Snow White and the Seven Dwarfs. This feature film was made in full color and sound, which costs 1.5 million to produce. It premiered in Los Angeles On December 21, 1937. The film became the most successful motion picture of 1938 and by May 1939 it crosses $6.5 million and won a total of eight Oscars, which makes it the most successful sound film made to that date.

The studio started production of Pinocchio in early 1938 and Fantasia in November of the same year. Both films were released in 1940 but failed to perform well at the box office. The studio was deeply in debt by the end of February 1941.

When Disney visited Griffith Park in Los Angeles with his daughters, he wanted to be in a park, where both children and their parents could have fun. When Disney visited the Tivoli Gardens in Copenhagen, Denmark, he was greatly influenced by the cleanliness and layout of the park.

On July 17, 1955, Disneyland theme park opened in Anaheim, California. The theme park becomes known as a place where both children and their parents could have fun. Disneyland branched out globally with parks in Tokyo, Paris, Hong Kong, and Shanghai.

Disney also got huge success in television as an entertainment medium. The Zorro and Davy Crockett series were extremely popular. Walt Disney’s Wonderful World of Color was a popular Sunday night show. The last major success that Disney produced himself was the motion picture Mary Poppins (1964), which was mixed live action and animation.

It takes people to make the dream a reality.
00:28 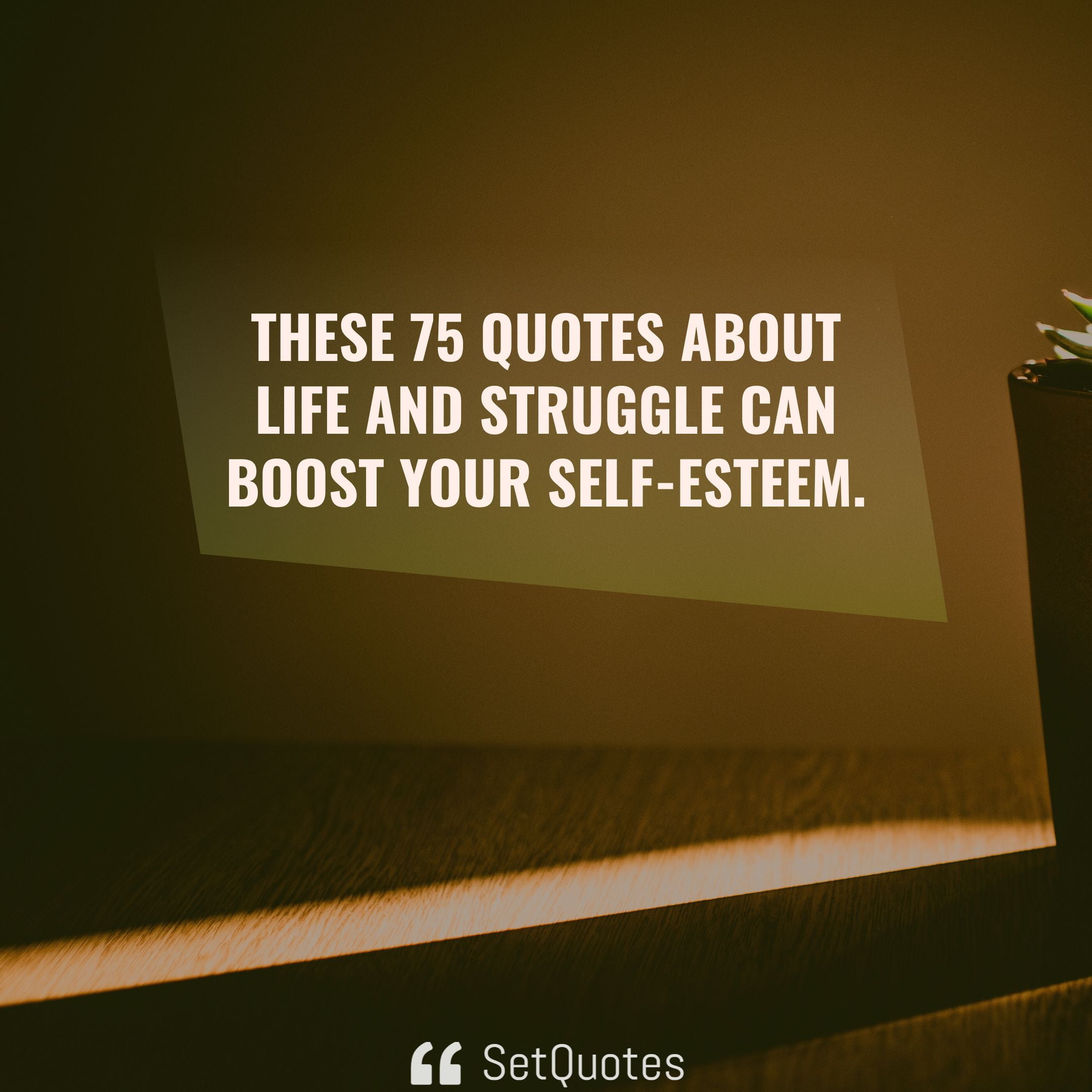 75 Great Inspirational Quotes About Life And Struggles To Boost Yourself. 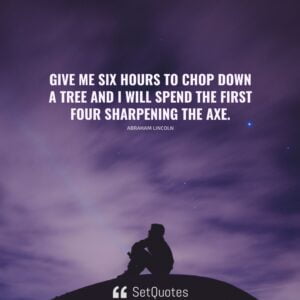 Give me six hours to chop down a tree and I will spend the first four sharpening the axe.

Be who you are and say what you feel, because those who mind don’t matter and those who matter don’t mind.