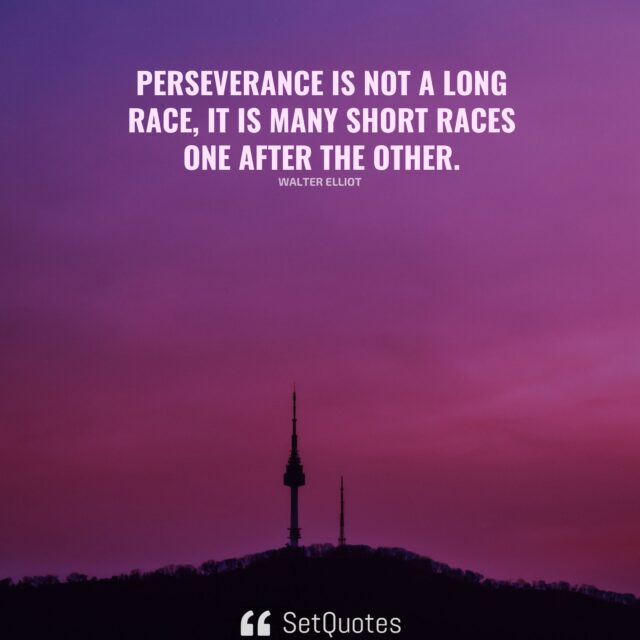 Perseverance is not a long race; it is many short races one after the other.
– Walter Elliot

Perseverance is staying the course regardless of setbacks or delays in meeting the expectations. Perseverance means continuing to work despite difficulties, failures, or opposition.

What makes the biggest difference is agility and the ability to adapt quickly to changing circumstances. It’s not just about doing it over and over again; it’s more about doing it with a better approach each time by learning from the past.

Dreaming of something is one thing, but putting it into action to make it happen is another. As Antoine de Saint-Exupéry, once said: “A goal without a plan is just a wish.“

Dreams don’t become reality merely by tying them to goals, but rather through planning and hard work. Planning itself is an art, however, the ability to turn goals into micro-goals makes all the difference.

Perseverance is a process

The key is to realize that great dreams don’t become a reality in a short period of time, but rather an accumulation of one milestone after another. Yet, more importantly, it is the ability to keep pushing forward despite the resistance that produces great results.

Dreams can be translated into reality through a process. It takes patience and planning to create one. Perseverance is the execution of one micro-process after another.

We are what we repeatedly do; excellence, then, is not an act but a habit.
– Will Durant

When you break down a difficult task into manageable components, you can achieve more. A systematic and realistic approach can make a big difference.

Excellence comes from translating great goals into small, actionable tasks and executing them until you reach your first milestone. In addition, the habit is to continue striving to reach one milestone after another despite failure, difficulties, or setbacks.

The most important thing is to keep moving forward in the right direction at the right time without giving up, no matter how fast or slow you go. Almost anything is possible if you plan ahead, work hard, and take a realistic approach.

Perseverance is keeping going despite failure by learning from it

Failure and success are not final outcomes, rather they are part of the process, and most importantly, they are to be expected. It is said that success and failure are two sides of the same coin, they cannot exist separately.

Behind every great story are adversity, hard work, and the ability to learn from failure. The best teacher we ever had is our own failures; they act as stepping stones, especially if we self-reflect and learn from them in order to be better.

You build on failure. You use it as a stepping stone.
– Johnny Cash

Isn’t it true that not failing at something or not making mistakes is a sign that we’re not doing anything new? When we execute something we are already an expert at, we rarely make mistakes.

Making mistakes or failing is a sign that you’re trying something new. A mistake isn’t really a mistake, but not learning from it and repeatedly repeating it is.

You should not let failure stop you from trying again. Make the most of your failures, take them as a learning opportunity, and keep trying until you succeed. Failure is nothing more than an opportunity to learn and make yourself better if you keep trying.

There is one great quote by Martin Luther King, Jr: “You don’t have to see the whole staircase, just take the first step.“

Believe in yourself, trust the process, and just take the first step, and you’ll end up creating momentum to keep moving forward regardless of difficulties or resistance.

Perseverance is a process of taking one step at a time. We can achieve almost anything as long as we don’t overthink and keep taking one step after another with the help of a realistic approach.

A failure is not always a mistake. It may simply be the best one can do under the circumstances. The real mistake is to stop trying.
– B.F. Skinner